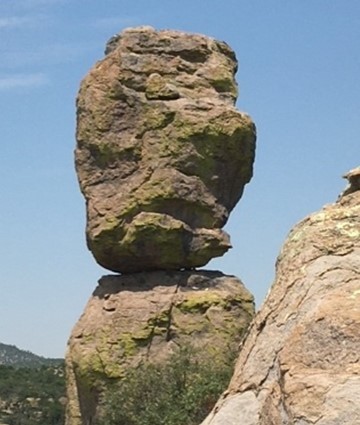 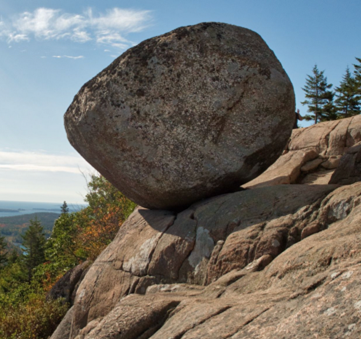 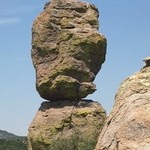 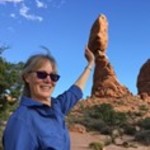 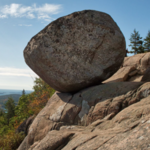 A fun moment when traveling is encountering large rocks that are precariously perched upon another rock and appear to be at great risk to topple over at any moment.  Yet, in most cases, these curiosities are remarkably stable, having been in that same position for up to millions of years.  They are called “precariously balanced rocks” (PBRs) and have recently become popular subjects of research.

PBRs are often found in national parks and national monuments, but are scattered all over the country.  We lived in Maine just outside Acadia National Park in the mid 80s and often visited “Bubble Rock” in the park (top pic), a boulder deposited on a rocky outcrop by a glacier. “Balanced Rock” in Arches National Park in Utah is a popular attraction that begs attempts at trick photography.  We encountered the rock in the bottom pic when visiting Chiricahua National Monument in southern AZ.

These oddities often become iconic tourist attractions.  But they have also become a valuable resource for scientists interested in understanding a region’s seismic history.

Most PBRs begin life underground where water helps erode them into smaller pieces of rock.  Over many years, erosion eliminates the soil above them, lowering the ground level and exposing the rocks piled on top of one another.

The study of these rocks began in the 1990s when scientist James Brune realized their potential for providing clues about earthquake activity in the area.  Brune had computer models that could replicate earthquakes and help him determine what level of seismic activity was required to knock the rock off its base.  Once calculated, that level of activity (or greater) could be written off from that area’s history (otherwise, the rock would have since fallen down).

Amir Allam, a geologist at the University of Utah, wants to map every PBR in Utah, as well as the forces necessary to displace them. He has reached 40 so far.  Using carbon dating, he can determine how long the rocks have been exposed, and using computer simulation, can determine the length of seismic history.

Allam rails against vandalism of PBRs.  Once toppled over, their history is forever lost.